The R-29RM is a three-stage liquid-propellant missile carrying four or ten MIRV. Compared to the R-29R the missile has a larger launch weight (40.3 to 35.5 Tons) providing a heavier payload (2800 kg to 1650 kg) to a greater maximum range (8300 to 8000 km). The R-29M incorporates a number of significant design changes relative to the predecessor R-29R

Relative to the R-29R, the diameter of the R-29RM was increased from 1.8 meters to 1.9 meters, which allowed an increase in propellant loading. The new missile's length was increased only slightly, from 14.1 meters to 14.8 meters, allowing the overall dimensions of the launching tube to remained constant. The D-9RM launch system for the R-29RM missiles is based on the D-9R system.

In 1988 the launch system was modernized providing improved accuracy, and for firing the missiles on depressed trajectories. At that time the missile was also equipped with improved warheads.

In late 1999 Russia announced plans to resume production of the SS-N-23. he state missile center Design Agency named after V. P. Makeev received a state order from the Russian government to resume the manufacture of naval missiles, including the most advanced RSM-54 system developed by the Agency when Victor Makeev was its general designer. While deployed with four warheads for the START I treaty, it was originally tested with 10 warheads and might be deployed with that number in the absence of such arms control agreements. It has been suggested that some of these liquid-fuel missiles could be deployed on land in the absence of the START agreements. T 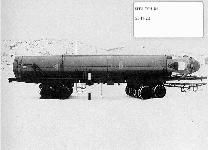