The R-27 / SS-N-6 submarine-launched ballistic missile is a single-stage, storable liquid-propellant missile. Three variants were deployed using an inertial guidance system, while a fourth variant [the SS-NX-13] used radio command guidance. One of the inertially-guided variants carried multiple re-entry vehicles [MRV] that were not independently targetted.

Sixteen of the SS-N-6 missiles were carried aboard the Yankee class nuclear submarine. Missiles could be launched while the submarine was submerged and underway. According to Western estimates, normal reaction time, while the submarine was submerged on patrol, was about 15 minutes. Reaction time under conditions of peak alert is one minute. The allowable hold time under conditions of peak alert was one hour. The Yankee submarine demonstrated a patrol capability of 75 days, and patrols of longer duration (90 days) were believed possible, consistent with crew provisioning and morale.

The D-5 launch system with R-27 missiles originated with studies by SKB-385 in the early 1960s to develop a ballistic missile capable of attacking sea-based targets. Development work resulted from a proposal by SKB-385 in late 1961 for the development of a launch system with a light single-stage missile for strikes against strategic land targets. The Yankee I submarnes were the designated carrier. On 24 April 1962 the project was officially authorized.

One distinctive innovation in this design was the placement of the rocket engines within the fuel tank in order to reduce the external dimensions of the vehicle. The missile body was made of aluminium alloys, and the fuel and oxidizer tanks had common bottoms. The command and control avionics systems were was placed in a hermetically sealed container in the lower interior of the oxidizer tank, eliminating the need for a separate instrument module. Another design innovation was the placement of the command system's sensors on a gyro-stabilized platform. These design features characterize all subsequent liquid-propellant SLBMs developed by SKB-385.

The propulsion system has a single-chamber sustainer and a dual-chamber control engine. The thrust chambers of the attitude control engine were oriented at an angle of 45 degrees from the stabilization axis of the missile (instead of the usual scheme in which the four thrust chambers are aligned along the stabilization axis). Due to an increased thrust ratio the R-26 missile had four times the range of the R-13 missile (2400 km against 600 km) despite its similar launching weight (14.2 versus 13.7 tons).

The missile was loaded in the launching tube with the use of several metallized rubber shock absorbers. Together with the lack of aerodynamic stabilizers, this allowed a significant reduction in the overall dimensions of the launch tube. The missile was fired from a flooded tube. A gas bubble generated by the missile's docking adapter dampened the hydraulic shock caused by engine ignition in the tube.

Testing of the D-5 launch system took place in three phases. During the first phase 12 pop-up tests were conducted from a flooded platform and a converted 613 submarine. Data from these tests was used to perfect underwater launch, rocket engine and launch tube designs. The second phase from June 1966 through April 1967 consisted of 12 successful launches (out of 17) from a ground platform. The test phases concluded with 6 missile firings from 667А submarines of the Northern fleet. Deployment began on 13 March 1968.

On 10 June 1971 it was decided to upgrade the D-5 launch system and the R-27 missiles. The modernized missile, with a more powerful engine and improved guidance system, was designated as R-27U and the launching system received the designation D-5U. The R-27U was designed to carry both single and multiple warheads. The upgraded missile was supposed to have the same maximum range as the original R-27, though equipped with three multiple reentry vehicles. The range and accuracy of the single warhead version of the R-27U was supposed to increase in 20 and 15 percent respectively.

Between September 1972 and August 1973 a total of 16 R-27U missiles were successfully launched from a submarine. On 04 January 1971 deployment of the D-5U launch system began. Yankee II and upgraded Yankee I submarines were outfitted with the new system and missiles.

The R-27U missile and D-5U launch system remained in service through 1990. Over the life of the program the service life of the missile was increased from five years to thirteen years.

The R-27K (SS-NX-13) modification featured a nose cone with a terminal guidance system. This missile, designated 4K18, was designed to attack both coastal radiocontrol installations and moving targets at sea. The R-27K missile was tested in 1974 on board the converted "K-102" 629 Golf submarine. 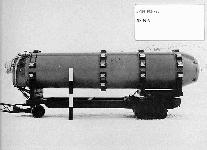