The Tu-160 is a multi-mission strategic bomber designed for operations ranging from subsonic speeds and low altitudes to speeds over Mach 1 at high altitudes. The two weapons bays can accommodate different mission-specific loads, including strategic cruise missiles, short-range guided missiles, nuclear and conventional bombs, and mines. Its basic armament of short-range guided missiles and strategic cruise missiles enables it to deliver nuclear strikes to targets with preassigned coordinates.In the future, after the aircraft is equipped with high-precision conventional weapons it may also be used against mobile or tactical targets.

The Tu-160 was the outcome of a multi-mission bomber competition, which included a Tupolev proposal for an aircraft design using elements of the Tu-144, the Myasishchev M- 18, and the Sukhoi a design based on the T-4 aircraft. The project of Myasishchev was considered to be the most successful, although the Tupolev organization was regarded as having the greatest potential for completing this complex project. Consequently, Tupolev was assigned to develop an aircraft using elements of the Myasishchev M-18 bomber design. The project was supervised by V.N. Binznyuk. Trial operations in the Air Forces began in 1987 with serial production being conducted at the Kazan Aviation Association.

The Tu-160 is characterized by low-mounted, swept-back, and tapered, variable geometry wings with large fixed-center section. The variable geometry wings (from 20 degrees up to 65 degrees) allows flight at supersonic and and subsonic speeds. Four NK-32 TRDDF [turbojet bypass engines with afterburners] of 25,000 kilograms-force power the T-160. The four turbofans, developed by OKB Kuznetsov in 1977, are mounted in pairs under the fixed-center section with square intakes and exhausts extending behind the wings’ trailing edges. The fuselage's slim structure is marked by a long, pointed, slightly upturned nose section and a stepped canopy. Tail flats are swept-back, tapered, and mid-mounted on the fin. The tail fin is back-tapered with a square tip and a fairing in the leading edge. The tail cone is located past the tail section. During the design of the aircraft, special attention was paid to reducing its signature. Measures were applied to reduce the signature of the engines to infra-red and radar detectors. Tests of these survivability measures were first tested on a TU-95 aircraft in 1980.

As the most powerful combat aircraft of the Soviet Air Forces, the T-160 flies at 2,000 km/hr and can exceed the 2,000 mark with a mission-specific load. The T-160 can climb 60-70 meters per second and reach heights of up 15,000 meters. The bomber can be refueled during flight by IL-78 and ZMS-2 tanker aircraft. The air refueling system consists of a probe and drogue airborne refueling system.

The TU-160 can carry up to 12 Kh-55 long range missiles and Kh-15 short range missiles. The weapons bays can accommodate different loads: carries various bombs: From fee falling nuclear and regular up to 1500 kg bombs. The bomber is not equipped with artillery armament.

The Tu-160 is equipped with a combined navigation-and-weapon aiming system, RID; [radar] for detecting targets on the ground and sea at long distances, an optical-electronic bombsight, an automatic terrain-following system, and active and passive radio-electronic warfare systems, as well as a probe-and-drogue airborne refueling system. It is equipped with K-36DM ejection seats. The cockpit instruments are the traditional electromechanical type. The aircraft is controlled with the aid of a central control column. The engine control throttles are located between the pilots' seats. There is a rest area, a toilet, and a cupboard for warming up food.

Studies have also been conducted on using the aircraft as a launch platform for the "Burlak" space launch vehicle, which is designed to carry payloads with a mass of 300 to 500 kg in polar orbits at an altitude of 500 to 700 km. Under this concept the launch vehicle, which has a solid-fuel engine and a delta wing, would be suspended under the airplane's fuselage.

In 1981 OKB Tupolev built two prototypes of the bomber and one mock-up that was used for static tests. The first flight test of the "70" aircraft took place on 19 December 1981. During flight tests, one of the two original planes was lost. Shortly after tests began, series production started. In 1984, the factory in Kazan started producing the bomber which received the designation TU-160. Initial plans provided for the construction of 100 airplanes but when their production was stopped in 1992, only 36 bombers had been built.

In May 1987, deployment of the first bombers began. Until the end of 1991, 19 TU-160 bombers served in the 184th regiment in Ukraine and became Ukrainian property after the dissolution of the USSR. In 1992 the 121th air regiment based at the aerodrome B.G. Engels was equippd with TU-160 bombers. Subsequently the bombers were tested to carry long range missiles.

It was reported on 02 July 1999 that the Gorbunov Kazan Air Industrial Association received an order from the Ministry of Defense of Russia to complete the production of one Tu-160 strategic bomber. According to the Association's general director Nail Hairullin the contract for the aircraft production was worth 45 million rubles.

In July 1999 the Minister of Defense of Ukraine Alexander Kuzmuk confirmed that Kiev officially proposed that Moscow accept as payment for the gas debts "about 10 strategic bombers Tu-160 and Tu-95". He refused to tell the exact cost of missile carriers, however, in his judgement, it would be "considerably more" than 25 million dollars for each machine. On 12 October 1999 the Russian air force announced an agreement that would allow Ukraine to pay some of its multimillion-dollar energy debts by handing over 11 strategic bombers. Ukraine had tried to unload the bombers since the Soviet Union collapsed in 1991, but talks had foundered because of differences over the price tag and other conditions. The deal includes eight Tupolev 160 Blackjack bombers and three Tupolev 95 Bears.

The 11 strategic bombers and 600 air-launched missiles exchanged by Ukraine to Russia in payment for the gas debt were transfered in mid-February 2000. Two Tu-160 bombers flew from Priluki in the Ukrainian Chernigov region for the Russian air base in Engels. The missiles were sent to Russia by railroad. Three Tu-95MS bombers and six Tu-160 airplanes had already arrived at Engels since October 1999 in fulfilment of the intergovernmental agreements. Before being moved to Russia, 19 Tu-160 airplanes were stationed at the Priluki airfield and 21 Tu-95MS were located in Uzin. 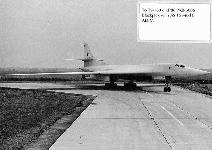